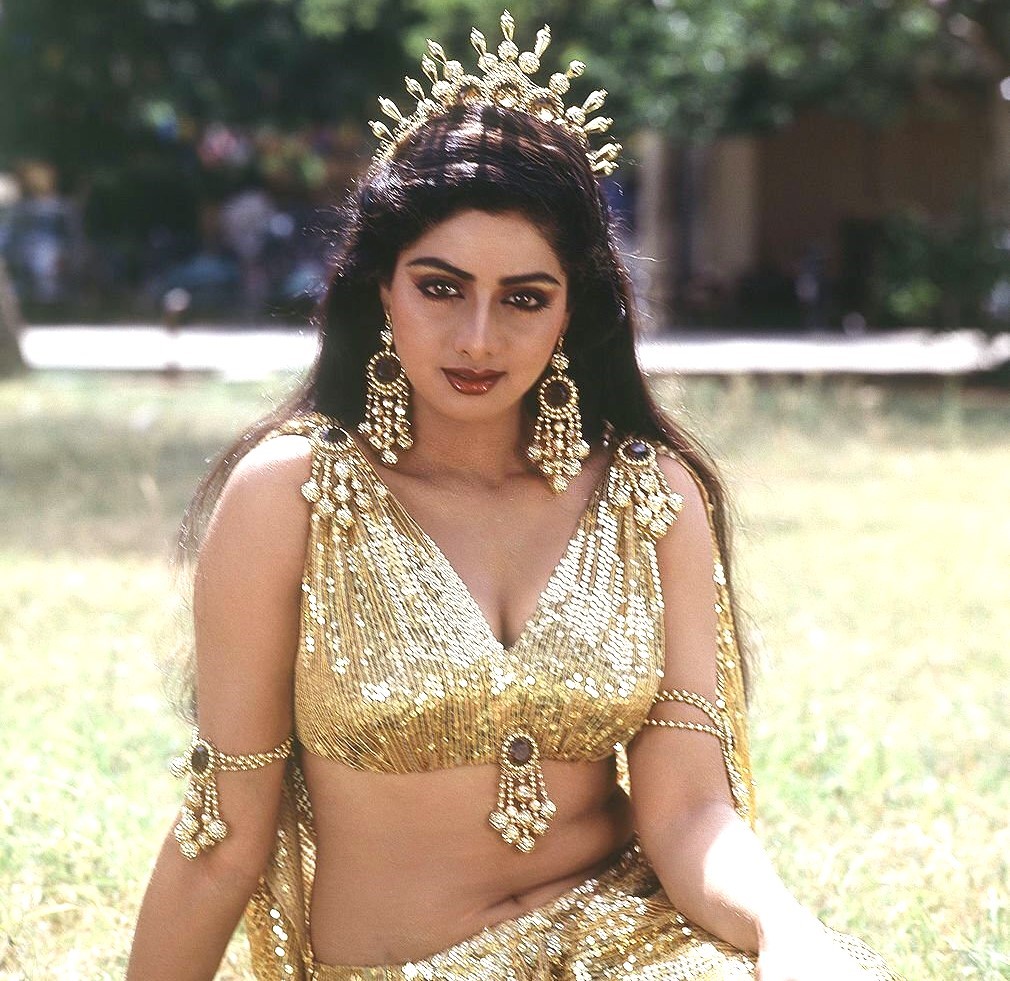 Growing up in a rural setting in the 1990s the only medium of entertainment was a small-band radio which my father would keep mainly to be updated with the weather forecast. Black and White TV would air a Bengali film only on Friday afternoon. Having a chance of enjoying would make us feel like the luckiest that too prying for a chance in the neighbours’ house. Equally thrilling was Alif-Laila- the Arabian Night – at 8 pm on Friday night.

By the age of 14-15 of my age in the late 90s, I would come across only one big photograph. The barbershops where I would have had my hair cut had it regardless of business prospect and investment value, it was their prime priority of hanging the photograph beside other heartthrobs of the time. Jewellery shop, photo studio, village tea-stall, butcher-shop and living rooms of people of the time were occupied by the photograph. And the photograph was of none other than our Sridevi. She was every young man’s sweetheart then.

Today the world is without Sridevi. A part of the world, especially the Indian subcontinent,  left shocked as she breathed her last in Dubai on early hour of Sunday, February 25, 2018. The queen of 80 and 90 died, at 54, of a cardiac arrest of accidental drowning in a wedding party where he has gone along with her family members to attend the wedding ceremony of her nephew Muhit Marwah. Reports say she was getting ready for a surprise dinner with her husband, Boney Kapoor. The Times of India describes her as a versatile actor who made her debut in 1978  with ‘Solva –Sowan’.

Born as Sree Amma Yanger Ayyapan on August 13, 19863 in Tamil Nadu in India Sridevi became the queen of the people soon after her debut as an adult actress in ‘Solva Sawan’ in 1978.

Her acting career started in 1969 with a devotional film Thunaivan at the of 4 and continued acting in various films in Tamil Malayalam, Telegu and Kandhal languages.  And eventually made her first appearance in Bollywood as a child artiste in 1975 through Julie, and subsequently a Tamil film Mundroo Mudhichu in 1976. Working along with from the big-boss famed Amitabh Bachchan, Shahrukh Khan to Kamal Hassan Sridevi acted in 300 plus films in five languages in just 54 years of her life.

After Sridevi made her announcement to come back after fifteen years with English Vinglish in Tronto IFA Award the media termed her as Meryl Streep of India. Hitting Box office English Vinglish was released on October 5, 2012, worldwide in 739 screens.

Her rule as Sashi Godble, the homemaker who runs a small business of laddo garnered huge appreciation among the film lovers. Her struggle to cope up with her children with modern education in English Medium and being mocked by them owing poor English skill was indeed bringing embarrassment to her. Her daughter Sapna’s passion for Jazz music was beyond her compression and was literally corrected with humiliation by Sapna while she wondered of Jazz pronouncing it as Zazz instead. Being in New York she felt like a fish out of the water as was constantly fighting with her deplorable English skill. Things took a new direction as she got admitted to an English Teaching centre that offers conversational English in just four weeks, and fell for Laurent the Chef of the coffee shop. She couldn’t tell Laurent that she was married, and refused and ran off as he tried to kiss her.

Based on comedy-drama English Vinglish is one of the finest films I have ever watched which is full of messages and moral standing to learn from. English Vinglish is a confessional film to her mother, who ran a pickle business at home in Pune, of the director Gauri Shinde. ‘I made this film to say sorry to my mother,’ says Shinde. The 11 crore Rupee budgeted film earned 78 crore rupee eventually making it the second biggest Bollywood hit in Hong Kong just after 3 Idiots.

In 2013 Sridevi was awarded Padma Shri by the UPA.

Born in Tamil Nadu to Tamil father Ayyapa and Telegu mother Rajeswari, he father was a lawyer she has a sister with stepbrothers. She married film director Boney Kapoor on June 2, 1996, and had two daughters Jhanvi (born on March 6, 1997) and Khushi (born on November 5, 2000).

We have lost our queen of heat this time; she is not going to shoot any films and going to surprise us with any mindboggling films. But Zero, the film with Shahrukh Khan is to be her last film to be acted during her lifetime. The aircraft with the remains of Sridevi will like to reach India from Dubai around midnight.